A two month old Bengal tiger (Panthera tigris tigris) cub – one of six living subspecies of tiger (three are already extinct). With an estimated 3,200 tigers left in the wild, WWF are committed to doubling the tiger population by 2022. 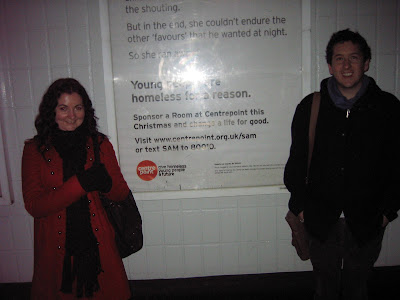 That’s Tim and the lovely Debbie Warren of Centrepoint flanking one of our posters. Here are all three of the executions currently gracing London’s mainline stations. Click the image to enlarge… 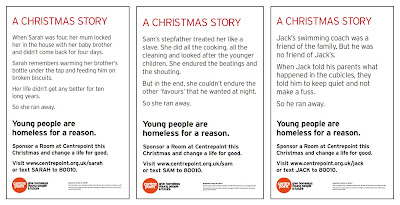 The original versions got banned (which I was secretly very pleased about) but even the toned down ones are pretty hard-hitting.

Or so I thought.

I took this snap at London Bridge on our way home from visiting a Centrepoint project down south of the river. It’s run by a wonderful woman called Jenny who, after we’d done the official bit, came to the pub with us for a quick drink.

Now Jenny, through her work, has a unique window on south London’s gang culture. And she has a way with words – which made for a series of stories that I still find hard to believe. I’m not going to try to re-tell her tales. But I will tell you one thing. Jenny told us that she’d been to ten funerals this year of young men who died violent deaths. Ten.

So, once again, Centrepoint opened a door for me into a world that I thought I knew about but, as it turns out, didn’t. It seems that there’s hard-hitting – and then there’s truly hard-hitting.

God love you, Jenny. There can’t be many people who could do what you do. 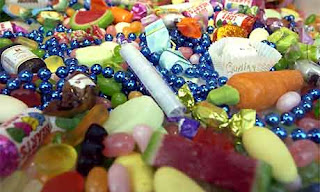 There I’ve said it and it’s true. I have a real fondness, a huge affection, a love for a shop.

I’ve known Woolies for as long as, well almost anything. This is where my Mum clothed me. This is where I’d ‘borrow’ the odd sweet, save up and buy my first single, and obsess over those impossibly long felt-tip sets.
Is it just me?
Surely this great institution has been a part of all our lives? And what a sad thought that I might not be able to share those same experiences with my children. I really don’t want to watch the reflection of the screen in my son’s eyes when we choose his first stationery set.
This is real potent emotion stuffed full of sherbet-smelling nostalgia.
And I know it’s not just me. A friend told me the other night that if someone knocked on his door asking for a pound for Woolworths he’d “throw a couple in”. Which is an odd thought because he’d probably tell a charity that “times were a bit hard…”
Woolworths and all its Britishness and commercial incompetence might be a million miles from the high street charity but I think there is a lesson to draw on.
My relationship with Woolies started when I was young – it answered my early desires. Perhaps not the clothes but a bag of pick ‘n mix and some 80s Pop.
So not surprisingly, I find I have a deeper level of affection for charities that were part of my childhood. I have really fond memories of going out at night with my mum and doing the house to house collection for Barnardo’s. It answered my desire to spend time with her, away from my siblings.
Charities should try and engage more with children and their families. Become integral players in childhood memories. I know this might seem like long-term planning but it’s really not that long before a child in primary school will be graduating and starting work.
So what went wrong for poor old Woolworths?
Well that’s easy. They didn’t plan for the long run. They didn’t go on-line.
Subscribe By Email to Ignore at Your Convenience!

Tweet
Before I start, let me just say that we love Harvest. We recommend that you use Harvest. And we think that the people at Harvest are truly wonderful individuals.

Why such enthusiasm? Well…

We set Open up as a network business – one that can draw on the best people as and when it needs them. That network now includes people all over the UK, in Canada and in Australia.

Now this is all very well. But when your team are confined only to the same planet (rather than to the same building) then managing their time and money can be very tricky.

So we decided to use something called Harvest. It’s a brilliant online app that means all our partners can enter timesheet information via a desktop widget while we can keep a handle on who’s doing what, see how much it’s costing, generate invoices and all that dull but vital stuff.

Anyway, when we signed up for Harvest I noticed that they do something called a New Founders Programme where every month they give a one-year subscription to the system to a recent start-up. So I wrote them a nice email, told them the Open story and guess what…

So, from all of us at Open, THANK YOU Harvest. We loved your product from the start. But we love it even more now that you’ve been so generous.